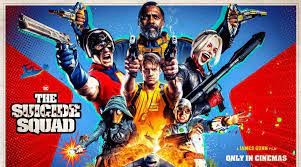 It is no secret that Warner Bros. has been dropping the ball with the DC Universe. I am not saying that every DC movie that comes out is garbage. Look at the Wonder Woman franchise that continues to grow, and Aquaman surprised many viewers with how fun it was. However, as an overall universe, it’s evident that, as a whole, Warner Bros. has severely dropped the ball. The first Suicide Squad embodied this slight missing of the target more than most of their films. Warner Bros. stacked the cast and came hard with a new style of ensemble anti-hero team; however, the storyline left us wanting more, and a few scenes were either needed or should have been edited out to have a more fluid film. The first Suicide Squad just really left fans wanting. Fast forward five years, and we got the movie we all wanted.

When the movie opened, I was excited to see that Michael Rooker (Guardians of the Galaxy, The Walking Dead, Mallrats) was playing Savant. His look was drastically different than other roles, with him sporting long white hair and his typical smart mouth hardly opened throughout his small part in the film. That another thing, the fact that James Gunn set up an entire team of some great celebrities to play the suicide squad only to kill them off in the first ten minutes was a brave and entertaining plan. The team had Nathan Fillion (Firefly, Castle, Dr. Horrible’s Sing-Along Blog) playing TDK, Jai Courtney (Terminator Genisys, Divergent, Spartacus) as Captain Boomerang, Mayling Ng (The Scorpion King: Book of Souls, Muna) as Mongal, Pete Davidson (S.N.L., The King of Staten Island) as Blackguard, Flula Borg (DuckTales, Tom, and Jerry in New York, Curb Your Enthusiasm) as Javelin and even Sean Gunn (Guardians of the Galaxy) as Weasel and Calendar Man. This was an amusing cast of characters, but when they all were killed just minutes into the movie, it forced the audience to take a step back and say to themselves, “this isn’t your typical Super-Hero flick.”

Margot Robbie is back as Harley Quinn, and it seems at this point that Harley will never be played by anyone else. Every hero has been recast in the DC universe (for the most part). Still, at this point, it is hard to imagine anyone else playing the beautifully psychotic former doctor. Margot brings authenticity to this role and does a great job of showing both her crazy side and the intellectual that is still hiding somewhere in the back of her mind. She can get out of situations that would be tough for any hero or villain in a seemingly effortless way.

Amanda Waller is also played by the same actor in this film, Viola Davis (Fences, United States of Tara, Law Abiding Citizen). After this film, the internet was on fire, with Waller being the biggest, baddest, and most despicable villain in the DC film universe. I don’t know if I would really agree with that, but she is definitely up there on the list. I mean, most villains have a mental disorder at the core of their issues; however, Waller stands with her deep need to “protect” her country and freedom. The scary part of this character is how REAL she is. People in power now have no issue with blackmailing someone to do something against their wishes based on destroying their children’s lives if they fail. It is disgusting.

With the first squad being killed, a second-team needs to step up. Of course, being the evil genius, Waller knew this would happen, so she already had a team in place. The new group consisting of Idris Elba (Luther, Thor, The Dark Tower) as Bloodsport, John Cena (WWE, Bumblebee, Playing with Fire) as Peacemaker, Daniela Melchior (The Payback, Valor da Vida) as Ratcatcher 2, David Dastmalchian (The Dark Knight, Dune, Prisoners) as Polka-dot Man and Sylvester Stallone (do I need to say anything here…) as King Shark.

This fun group of action-packed weirdos makes the entire film so much fun. King Shark is my standout character. Sly always makes sure he is at the forefront of any movie he is in, and all though we never see his face, he steals the show in this one just the same.

I was honestly surprised at how much I liked this film. I have been let down by DC in the past (as we all have, I am sure); all though I always like the movie, they leave me wanting more. This film did everything I wanted and then some. I am happy to see DC and Warner Bros. letting the creative teams do what they do best and letting them run with ideas. Some of the things in this movie really should not have worked. Having a giant alien starfish being the monster at the end could have been done so hacky and goofy that it let the film fizzle out in the future; however, it worked so well artistically and comedically while also giving the action this story needed. I hope that James Gunn will head up more DC films and turn things around for the universe.

It was nice that Harley was still a focus of the story without it all being about her. The decision to really flesh out each member (for the most part) of the squad was wise. We all love Harley, but we’ve already had her films; it was nice to see they did not use her as a crutch the whole time.

Written exclusively for our company by Jacob Ruble

Sitcoms Anyone?Something for the 90′ Fans